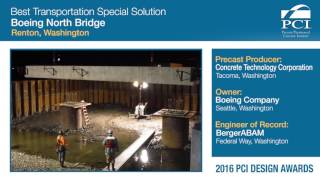 The North Cedar River Bridge is used to transport aircraft from Boeing’s production facility to the Renton Municipal airport.  It replaces a 70 year old structure that was determined to be structurally and seismically deficient.  The design team earned the 2016 PCI design award for “Best Special Solution” for utilization of an Accelerated Bridge Construction (ABC).  The use of prefabricated bridge components was an ideal solution for a site with significant schedule challenges due to airport traffic, manufacturing operations and in-water work restrictions.  The overall schedule was reduced by six weeks utilizing ABC methods.

The substructure consists of precast columns and crossbeams.  The columns utilize a “socket” connection to the CIP shaft and a “grouted duct” connection to the precast crossbeam. For more details of the design methodology and structural system, refer to the May/June 2015 PCI Journal article “Replacing the Boeing North Bridge”