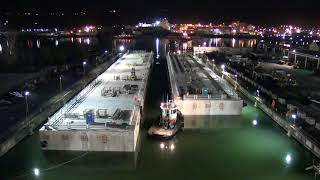 Two concrete floats were constructed for two new cruise ship berths for the City of Juneau.  The berths are designed to accommodate Panamax and post-Panamax ships. Each berth consists of a partial length concrete float with pile dolphins providing the remainder of the mooring interface.  Both floats are 20’ deep x 50’ wide, with lengths of 300’ and 400’ at the South and North berths respectively.  The floating structures are moored with restraint dolphins at each end, and are accessed by a transfer bridge which bears on a cantilevered landing attached to the exterior float wall.

The concrete floats were constructed using the precast method.  The majority of concrete volume consisted of precast walls and haunch decks cast in CTC’s production facility.  Precast components were then moved to CTC’s Graving Dock for integration.  Keel slabs, pilasters and composite deck topping were cast in-situ in the Graving Dock.  Post-tensioning was then applied longitudinally and transversely to complete the system.

Once construction was completed at CTC’s facility, the floats were towed to the project site and installed next to downtown Juneau.